Most of the citizens of the Black Eagle Barony are fishermen, or have other jobs where work outside of the city walls is required, such as farming. In order to maintain control of his population and ensure that people are not fleeing its borders, the Baron requires that all workers outside of the walls present a member of their family to the city watch in the morning. This family member will be held as a “guest” of the Baron’s guards until the worker is finish in the evening. Any guests that are not retrieved by evening (or later with specific permission from the Baron) often end up “missing.” Additionally, all citizens are required to have identification papers on their persons at all times, and are subject to random inspections by guards to ensure they are in their authorized places inside the city and out. 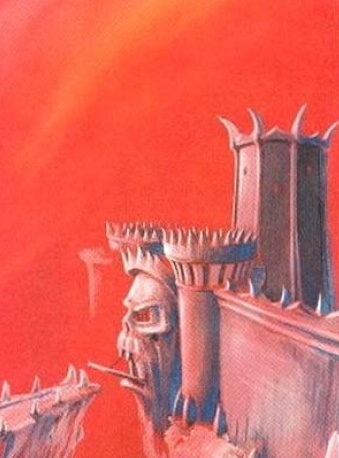 The Baron’s castle, Fort Doom, is a foreboding structure that is built atop a steep plateau with a gatehouse built to represent a skull. Its dungeons are rumored to be filled with those who have displeased the Baron.

Any who have dared to oppose the Baron have been brutally suppressed by the Baron and his formidable army, consisting of mostly humans, orcs, half-orcs and goblinoids. Additionally, the Baron is known to have ruthless mercenaries on his payroll, as well as the support of his powerful court wizard, Bargle the Infamous. Rumors also persist that the Baron has connections with the slaver/thieves guild known as the Iron Ring. Rumors also claim that the Baron’s minions have, on the Baron’s orders, raided other parts of Karameikos, for profit and slaughter, but so far there has been no direct evidence tying the Baron to these actions. Duke Stefen has yet to take action against his cousin, seemingly to have an inability to believe that such horrid stories about one of his own family could be true.