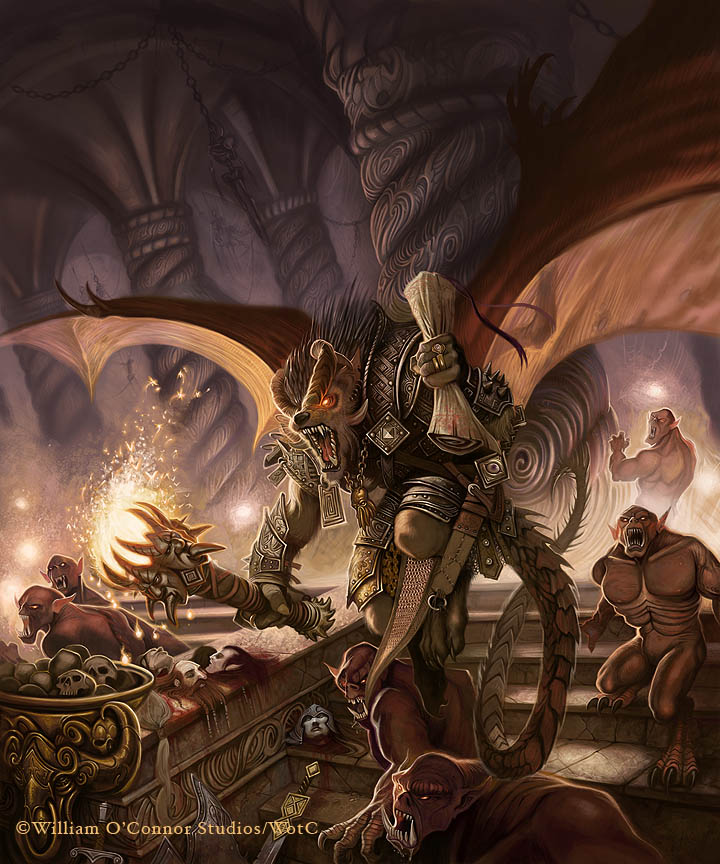 Battle raged in the inner sanctum of the Well of Demons as Magnara, Takashi, Valyrian, Gibbet, Lester and Gwen fought to stop the blasphemous ritual that the leader of the Blackfang Gnolls, Maldrick Scarmaker, was trying to enact. By the time the group arrived, there were only two prisoners awaiting sacrifice in the magical circle, who knows how many had already been given over to the demon lord Yeenoghu.

Beset by demonically-tainted gnolls and Demons from the Abyss, the party fought to get within melee distance of Maldrick. The gnoll warlock continued to work his corrupted magic while contributing what effort he could to assist his minions in stopping the party from interfering with the ritual. Magical fire, Eldritch energy and clouds of poison filled the chamber as the two sides clashed. Demons were banished, party members fell and were healed to continue fighting. The battle became a grind as both sides took turns gaining and losing ground.

There was a sudden change in the ebb and flow of the battle as Gibbet was able to break through the demon battle line. Immediately after decapitating a demon with his axe, he seized the opening and dashed into melee with Maldrick sinking his axe into the gnoll’s side. Gibbet was soon joined by Magnara, and then the whole party stood against the gnoll warlock. Maldrick unleashed powerful magic in a desperate attempt to fend off his foes but he was outnumbered, trapped in melee with two formidable warriors, and taking ranged fire from arrows and magic. The final prisoner was sacrificed to the ritual right before Magnara finished Maldrick with a mighty slash that bisected the Gnoll’s body. A strange and dark cloud of constantly roiling shadow filled the spot where Maldrick’s magical circle had stood. No one was quite sure what the darkness was though Lester and Gibbet suspected that it might be a portal, or the start of one to some place unpleasant, like the Abyss.

Finished with being Asmodeus’ pawns, it was decided that the strange darkness was Meredith’s problem. The party had completed Lester’s task of cleansing the Gnolls from the Well of Demons and headed back to the Seven-Pillared Hall to report their success to the Duegar.