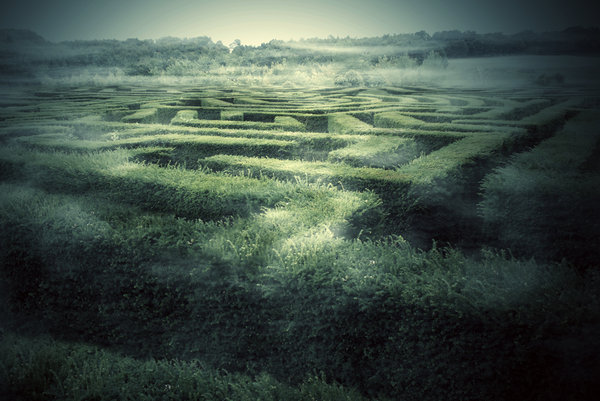 The garden is an eerie and beautiful hedge maze with various nighttime blooming flowers and exotic plants. Fortunately there are several in the group trained in navigation, and coupled with Enna’s high intellect, the party is able to navigate the maze with little trouble, arriving in a pleasant grassy courtyard with a strange haphazardly constructed single story house guarded by undead sentinels. The undead take no aggressive action as the party approaches and politely knocks on the door, to which Lady Nightshade, a young beautiful human woman of noble bearing, answers and invites them in.

The party finds that Lady Nightshade is pleased to have guests and arrangements are made to share a meal, have performances done by Biggle and Allegro, and share pleasant conversation. Lady Nightshade shares her story about how she came to live in Topaline, basically she grew tired of the political and social games of courtly life in the city of Waterdeep, and purposely sought out the “dead” city when she first learned about it because she wanted a refuge to live a new life and conduct her magical research in private; being a necromancer, Topaline was a perfect place for Lady Nightshade to practice her arcane arts. This revelation appalls Severius, and after a brief debate on the matter, Severius storms off to spend the rest of the visit outside in prayer and meditation.

Lady Nightshade proves to be quite helpful, providing the party with information on Topaline, the city’s notable inhabitants, theories on undead and confirms what Enna’s research in the Swan Lake tower library showed, that a Planar Amulet should be able to close the gate by touching it to the travel stone. Other than Kinguapus, the only other personality of note in Topaline is Baron Mishcaron, who lives in the temple below the central plaza and who is in possession of a Planar Amulet, which Lady Nightshade knows for a fact because the Baron has allowed her to study it briefly. She describes Baron Mishcaron as a charming, but sometimes brooding, man who was the leader of the Shadowmasters, Topaline’s elite security force. Lady Nightshade feels that the Baron’s drastic mood swings are a result of his feelings of failure for not being able to protect his city, being obsessed with protecting the dead city that remains and being depressed and angry about his previous way of life no longer existing.

After exchanging some magical knowledge with Enna, the party decides it is time to get going. After retrieving a silent and brooding Severius, Lady Nightshade shows them a secret trapdoor in her maze garden that leads to the subterranean temple. Bidding Lady Nightshade goodbye, with a promise to visit her when they finish their visit with the Baron, they head down into the darkness…