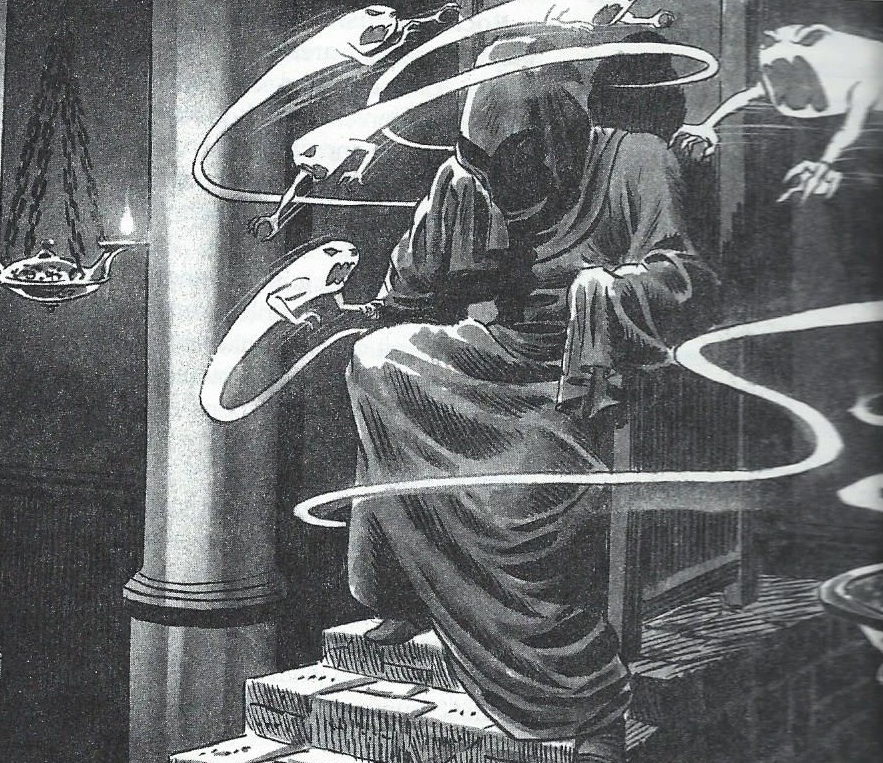 After negotiating a magically wind-filled room with concealed pitfalls, Magnara, Takashi, Gibbet, Gwen, Lester and Valyrian made it to the heart of the Witch’s Hour Sage’s domain. A mysterious figure, the Sage sat on a simple throne of wood surrounded by blobs of flesh that were covered in a multitude of mouths and eyes ever babbling in a cacophony of random words and languages. Occasionally, the party members could pick out a word or sentence relevant to their personal experiences, sometimes expressing a secret known only to themselves. The Sage sat in silence within this tirade of words, small wisps of ghost-like figures flying around its form.

The group prodded Lester and Takashi forward, and the attention of the Sage was gained by their inquiry, “Who is our father?”

The Sage replied that it could provide an answer, though payment would have to be provided first- the price was one of their party members. This disturbed the party, and casting his divine sense about the room, Magnara was able to see that the Sage and the tiny ghost-like figures about its form were undead of some sort. Taking this information into account with the draining of their life force and magical energy since their travels in this domain, Lester and Valyrian proposed the theory that this domain was a phylactery of sorts, the energy it takes from the living used to sustain the Witch’s Hour Sage. There was little doubt about the fate of anyone used as “payment.”

Payment was non-negotiable- the party would not give the Sage what it wanted and the Sage would take nothing else. Negotiations quickly collapsed bringing the Sage’s ire and battle commenced. The Sage and it’s minions were slow to act and this advantage enabled the party to quickly dispatch their foes, though defeated, the Sage could not be destroyed. It stood incorporeal, telling the party that their efforts, and the brief respite they had given it from the maddening babble of voices, had earned them an answer to their question and expulsion from its domain.

“I will not tell you his name, but I will tell you where to find him.  Travel to the east to the Kingdom of Ghyr.  There fate will be your guide for what you seek."