I have only recently awaken…my wounds are deep and many but they will heal. To come so close to death’s door…to almost come to stand in judgement before Gorm….both a blessing, because I know that I have been his ever-loyal servant, and a fear, because I know there is still much work for me to do in his name.

I am still unsure of what happened…what provoked this attack on me and my friend Biggle. We had only just arrived at the campsite of the Druid Gariena and her two faerie companions…sprites I think…and were enjoying friendly conversation when the Druid and her three Ranger companions from the previous campsite approached us with weapons drawn…hostile looks on their faces. Biggle stepped towards them, most likely to exchange a friendly inquiry when they charged to attack us. Their Druid leader unleashing a magical fireball in our midst. Biggle and I were able to avoid most of the blast but the sprites were cremated where they stood and Gariena suffered horrendous burns.

Confusion gripped me briefly as I could think of no reason for being assaulted…I thought our conversation with these people was pleasant enough despite my feeling that they were being elusive about some of their knowledge of strange happenings of the Dessarin Valley and how they acted nervous during our conversation. Perhaps Biggle had shared too much of our party’s exploits.

Outnumbered and boxed in by the three warriors, we were at a massive disadvantage. Luckily my armor and shield protected me from most of the blades but the Druid was free to cast magic unmolested. Fortunately aid came to us by an enraged Gariena. In a fury because of the deaths of her friends, she called down lightning from the sky to blast the other Druid. The two became involved in a magikal duel as the warriors focused on me and Biggle. I believe that Biggle and I owe our lives to Gariena’s efforts…without her involvement we would have surely died.

Consciousness left me when one of the warriors struck me down. I remembered briefly being in sorrow because the battle was so sudden that I still had many gifts of Gorm left at my disposal and was not able to unleash their fury on my foes.

When I came to, I was relieved to find Biggle and Gariena alive and our foes vanquished. As I looked through the smoky haze to the ruins of the towering abbey and the massive burning wicker man effigy nearby I couldn’t help but to feel a sudden moment of dread…something was not right… 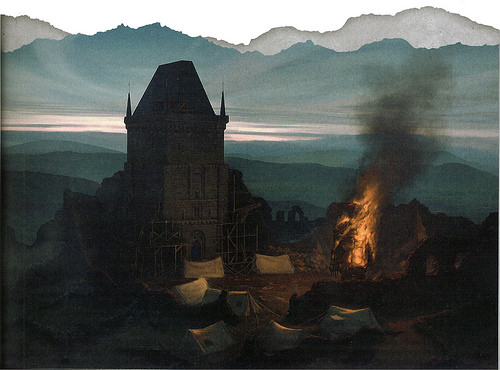