I have really not had any extended contact with the giant races. Before meeting Moog my only prior experience was with the two Hill Giants that attacked us in the Sumber Hills. Giants were not known to me prior to my travels to the surface, understandably so since I’m sure the tight confines of the Underdark are difficult to travel for those of such high stature. Moog appears to be a being of low intelligence, temperamental and driven by wholly basic survival and immediate gratification needs. Aszh tells me that not all giants are such, and that there are different races of giants with varied levels of intellect and capabilities. I am told that Moog is a Hill Giant, considered the lowest caste of the more common giant-kin. Our alliance with Moog has been very demanding. She is always demanding more food, demanding that we rescue her husband and quick to bawl and scream at us, threatening violence at times. I can see why the ranches of Beliard are worried. If one giant has this much of an appetite and is so quick to anger, a sizable group of them would be a dire threat to any living in the area. While formidable in brute strength, we do not see Moog as much of a threat to our combined might and tolerate her antics so we can complete of goal of locating the lair of this Chief Guh, which Moog claims is the giants’ leader. So far Moog has been leading us in an easterly direction and we have been traveling for two days through a constant downpour of rain.

We did have an encounter with a group of foraging giants which Moog identified as Flab Giants. They were short for giants, about the height of an ogre but their bodies were twice as wide, covered in thick rolls of fat. We set up an ambush for them, Biggle using some of his illusionary majick to draw them to us. Our plan almost failed due to Moog believing the illusionary boar for a real one and running off the Flab Giants. We had to take action quickly to cut off the Flab Giants’ escape while worried about Moog’s temper when she discovered the boar was not real. The battle was relatively quick, with Aszh being the only one in our party to sustain significant wounds, which Biggle and I were able to heal with our majick.

By the time we reached Chief Guh’s lair, what Moog called Grudd Haug, the rain had finally stopped and was replaced by sunshine. Despite the bright light hindering my vision, I was still able to see that Grudd Haug was a massive construction. Simple but intimidating, it looked like a giant mound made of dirt and trees. Aszh described it as similar to a giant beaver mound, though I do not know what a beaver is. A fence of stripped tree logs protected one end of entrances and a high wooden watch tower overlooked the countryside. Our arrival, likely announced due to those in our party flying on hippogriffs, was spotted and a gong began ringing. Somewhere inside this mound of dirt was Moog’s husband. I’m sure that he is only one of many giants waiting for us. 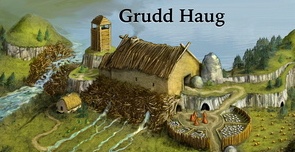