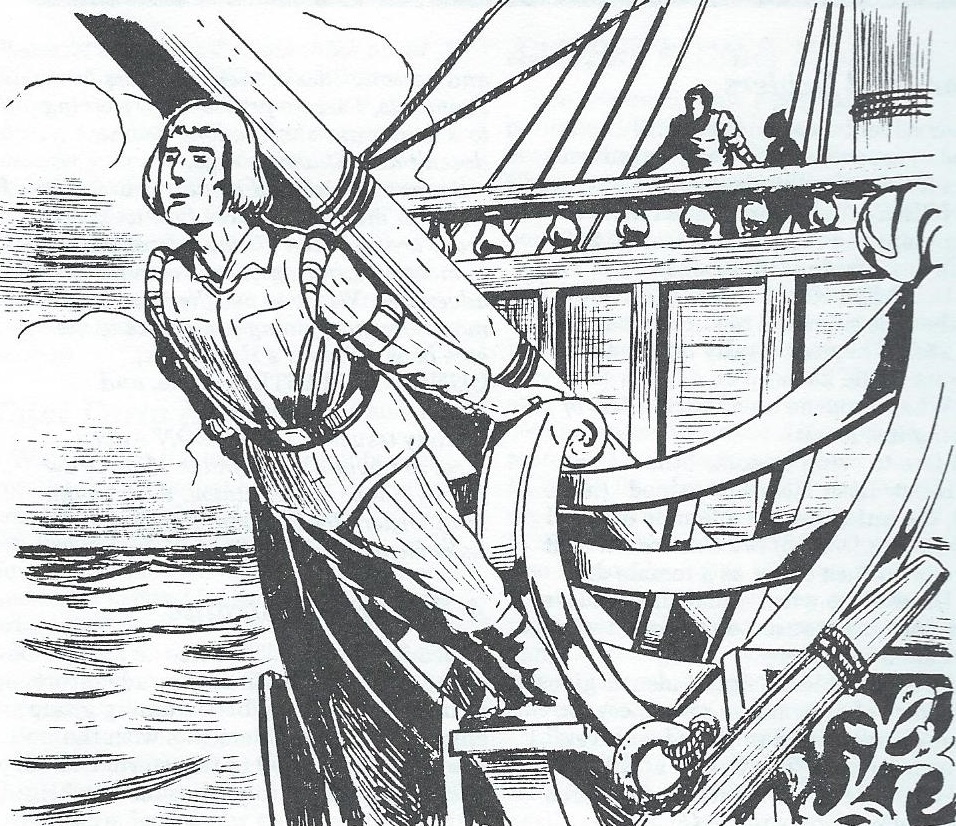 The ocean. Never before had I imagined such a great expanse of water existed. The Great Lake in my subterranean city home is a puddle compared to what I see before me now- miles and miles of water stretching as far as the eye could see. My companions tell me that you could sail for months and still have many more miles of sailing if you wish. Surely they jest.

Despite the wonder of this “ocean” there is one aspect of it I could do without- sea sickness. My companions tell me that this condition is caused by the movement of the water and I spent the first two days of our journey on the sailing vessel called the Vaka (which is bigger than any of the boats that navigate my homeland’s Great Lake, and I’m told by my companions that there exists ships larger than the Vaka- truly amazing) leaning over the deck railing vomiting the contents of my stomach and was quickly reduced to painful dry-heaving. I was very tempted to use Gorm’s power cure my ailments but I needed to conserve my power for the ocean, which I am told is hazardous and unpredictable.

By the end of our trip we would find that it was not the ocean that would bring us peril, but the ship itself. A few days on board the Vaka, signs of something strange going peeked the interest of me and my party. An alcoholic captain who charged less than normal prices for passage, an uneasy crew and a strange seemingly supernatural sickness that started effecting me and my companions (even causing my friend Takashi to age several years overnight) lead to a tense passage and a clandestine search for information by the more stealthy members of our party. The source of the supernatural sickness would be discovered by a chance sighting of a creature made of shadow that stealing our life force while we slept. While this shadow managed to escape destruction at the time, a subsequent conference with captain confirmed our suspicions when he hesitantly divulged that his ship was cursed.

With the captain’s permission, and as his crew looked on, my companions and I scoured the entire ship using Gorm’s power to detect the location of this foul undead creature. Gorm led us to the ship’s wooden figurehead- a life-sized carved image of a rather normal-looking man looking forward to the horizon. There was no doubt that evil energy was emanating from this figure and a stick into the wood using a magical dagger unleashed a creature made of pure shadow. This humanoid shadow attacked us as we sought to destroy its refuge- the figurehead, which was further complicated because it appeared that it could only be harmed by magick and magickal weapons. Those fighting the shadow could only cause enough damage to temporarily destroy the creature and send it back to its refuge to reconstitute itself and renew its attack.

Eventually we were successful in our efforts and the hacked and burnt remains of the shadow’s refuge fell into the ocean. There was an immediate sense of Peace on the ship and it appears that the undead creature was finally destroyed. Captain Siegel and the crew of the Vaka were ever grateful and we were told we would never pay for future passage on the Vaka.

Severius' Journal- On the Cairn Road

The Mount of Forgiveness seems like a strange name, the Mount of Death would be more proper