The Mount of Forgiveness seems like a strange name, the Mount of Death would be more proper

There was a brilliant flash of golden radiant light from Severius’ mask-helm of Gorm. Some of ghouls took a step back and momentarily shielded their faces with their arms while others fled the area deeper into the burial catacombs. As Severius used Gorm’s holy power to turn the undead, the rest of the party renewed their attacks against the remaining ghouls, Dovak’s mighty battle ax strokes hacking a toll in their numbers, Lester unleashing the foul corrupt energies of his magicks and Allegro darting in and out to stab with precision strikes on vulnerable areas.

Haroushin’s sources were correct, the catacombs underneath the Mount of Forgiveness were teeming with undead and it would likely require a prolonged effort of hardy warriors backed by holy magicks to ultimately cleanse the place. Fortunately, Severius and his companions were only interested in interring their dead companion, Joreal, in a proper place of honor with a small and respectful ceremony to honor his passing. After cleansing this area, the group intended to do just that and they would report to Haroushin when they returned and the undead they found, and suspected were in the deeper levels of the Mount.

Despite the foulness of the place, Severius found the dark subterranean catacombs to be the closest thing to home over past few days. Severius was still trying to get used to the open air desert with the bright blistering sun during the day and the cold moonlit evenings. The sights and sounds of the outside world were strange, confusion, amazing and terrible- sometimes all at the same time. It was sad to say that an undead infested subterranean crypt felt like home but at least Severius felt like he was in his element again and at peak performance, with Gorm to guide him, victory would surely be theirs. 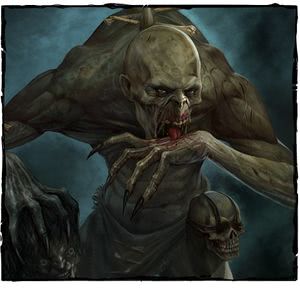