After a rash of setbacks and ill-fated forays into the ancient Dwarven city controlled by Queen Aerisi, we have finally achieved success…of a sort. I proposed the idea of splitting the party- one half consisting of Lord Daylon, Allegro, Enna and Aszh and the other consisting of myself, Dovak, Biggle and Brundalthar. Lord Daylon’s group was charged with sneaking to the base of the Feathergale Spire in the hopes of retrieving Lady Savra’s remains for possible resurrection. My group was charged with the continued care of our prisoner and the hope that she could be interrogated or otherwise convinced to provide us with information on this cult dedicated to the worship of an deity called Yan-C-Bin. There was good reason to believe that cultists and members of the Feathergale Society would be a danger to both groups, so caution and Gorm’s protection would be needed for success.

After Lord Daylon’s group departed, I went to work caring for our prisoner, a commoner from Red Larch named Selina. Her health was still in a fragile state but time was short, for we needed answers, both for Lady Savra’s sake and the sake of the remaining Delegation members. With Dovak’s assistance in providing medical care, I offered a mix of teachings from the Book of Gorm, geared at demonstrating to Selina both Gorm’s magnificence and his righteousness. She made a feeble attempt to attack my faith and the wisdom of Gorm’s word by regurgitating the shallow lessons she was likely taught by these “priests” of Yan-C-Bin. Unlike Selina, I had grew up in the temple of Gorm and my teachers were some of the best my faith had in its membership. Also, unlike Yan-C-Bin, Gorm had legitimate compassion for his followers and prospective followers, and would not force someone through the hardships that Selina had to go through to prove her faith. Did Gorm demand sacrifice? Of course, when the time was right and reason a noble one. Did Gorm demand trials of his followers? Of course, hours, sometimes days, of prayer accompanied by fasting occur but not starvation. I torn down the paper stone-colored walls of faith she tried to hide behind. I pulled back the veil of mystique and glamor this Yan-C-Bin tried to hide behind and exposed it for the fiend it was.

Granted, I was assisted in battering down Selina’s emotional and mental defenses by her physically weakened state, but that was what needed to happen to save her soul. In the end the stress was too much for her body and the life passed from her while outside the barn Biggle distracted a pair of Feathergale Knights from further explorations of the farm, his disguise and deception perfect. Selina was gone but she was not yet lost. I grabbed one of our group’s precious remaining diamonds and offered it to Gorm as I asked him to bring Selina back to the living. This was my first time ever attempting to bring the dead back to life and Gorm granted my request. Selina drew in a big breath as she came back to the world of the living and I could see in her eyes that Gorm’s followers had increased by one more. 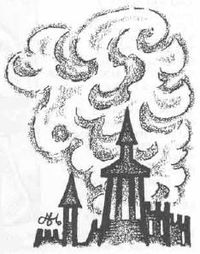