I am writing these words in the tranquil comfort of the Swan Park, a solitary respite in a city full of undead and evil. My companions and I were lucky to come to this place when we did for I fear that venturing elsewhere to continue our explorations of this dead city would have been our doom. Since our arrival in this dark strange glass-enclosed city we have been under near constant assault by the undead. Skeletons, zombies and undead of a more exotic nature have been our foes. Our last attack occurred in the city’s central plaza while I stood in stunned silence studying the trio of statues that represented this city’s pantheon. These deities were very similar in appearance to my kingdom’s deities of Gorm, Madura and Usamigaras, and after speaking with the guardian of the Swan Park library tower, a Shedu named Kinguapus, I believe they are all one in the same. Kinguapus appears to be very knowledgeable in these matters and told me that sometimes gods and goddess take on different aspects on different worlds to better appeal to the inhabiting cultures. This of course brought the understanding that I was no longer on my world.

In dire need of rest and recuperation from our previous battles, Kinguapus offered us refuge at the Park, explaining that it was the safest place in Topaline. His presence and the powerful magic left by its long deceased builders keep the undead away. Kinguapus also offered us the use of the tower library, which was the city’s main repository of written works, and the reason for his presence in such a lonely and depressing place. He shared the story of his appointment as guardian three hundred and forty-one years ago and the tragic downfall of Topaline that occurred shortly afterward by happenstance. 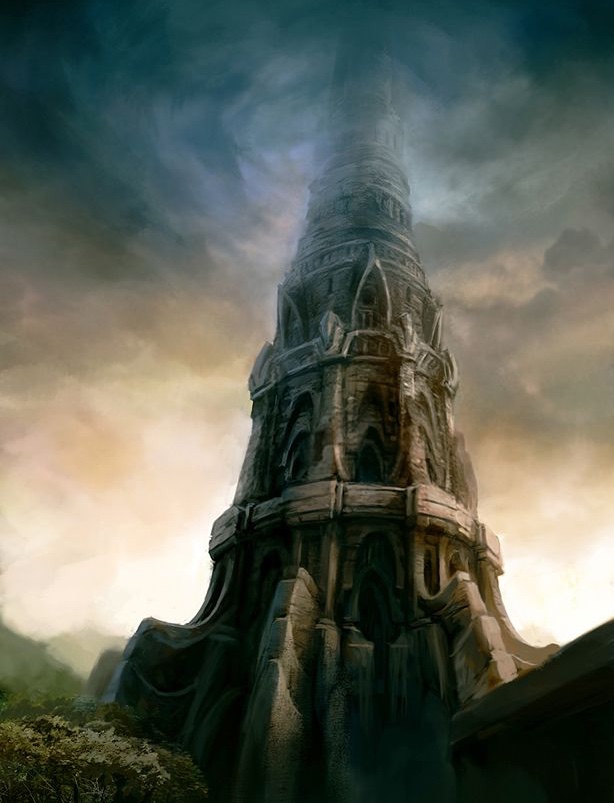 Kinguapus explained that sometimes those of his kind enter contracts with civilizations to protect collections of knowledge or art and locations of magical or spiritual power. He had entered into his contract with the Mystics, the people of Topaline, only days before the city fell to the undead. Kinguapus explained that the Mystics were powerful majick users, experts in teleportation and planar travel majick. Their expertise allowed them to create a large and powerful civilization that spanned across worlds and planes, all connected by magical gates anchored to travel stones. When the proper command phrase was spoken, a gate would open and travelers utilized a majickally protected conduit through the Plane of Negative Energy to emerge out a gate anchored to the travel stone at their destination. Unfortunately over time, the majickal protections for the conduits broke down and the gates became unstable allowing undead to travel to the gate destinations. The Mystics became aware of this threat and started to take actions to address it, but for the Mystics of Topaline it was already too late. Gates to the city suffered catastrophic breaches allowing undead to flood the city. Some residents were able to escape the city but the vast majority did not and were slain only to rise as undead themselves wandering the streets and buildings of their dead city.

Kinguapus also told us about the strange glass enclosure surrounding the city, explaining that it was a magical substance called Topaline (apparently the Mystics named their cities after whatever was the chief export). It is a hardy material that was used to regulate incoming sunlight and the temperature of the city. When the great catastrophe occurred, it was during the hotter summer months and the enclosure was set to the dark cycle (no sunlight and cool temperatures). Kinguapus believes that there is a device in the temple located underneath that central plaza that controls the enclosure, and if it can be found and manipulated it could allow the sunlight back into the city destroying many of the undead.

Kinguapus was also able to find us a tome on the travel gates which Enna reviewed and was able to discover a possible method of closing the gate at Red Larch. It involves obtaining a magical device called a Planar Amulet and touching this to the travel stone to discharge the teleportation magic within. Kinguapus believes that these Amulets were being developed in the temple complex as well but warned us that the main entrance has collapsed and he does not know of a way to get inside. He did relate that there is a wizard, a noblewoman from the city of Waterdeep named Lady Nightshade that lives in the city in a large garden that is warded against the undead. She visits Kinguapus occasionally to conduct research in the library and she has mentioned knowing a secret way into the temple. It is time to return to the dangers of the dead city of Topaline and seek out Lady Nightshade.