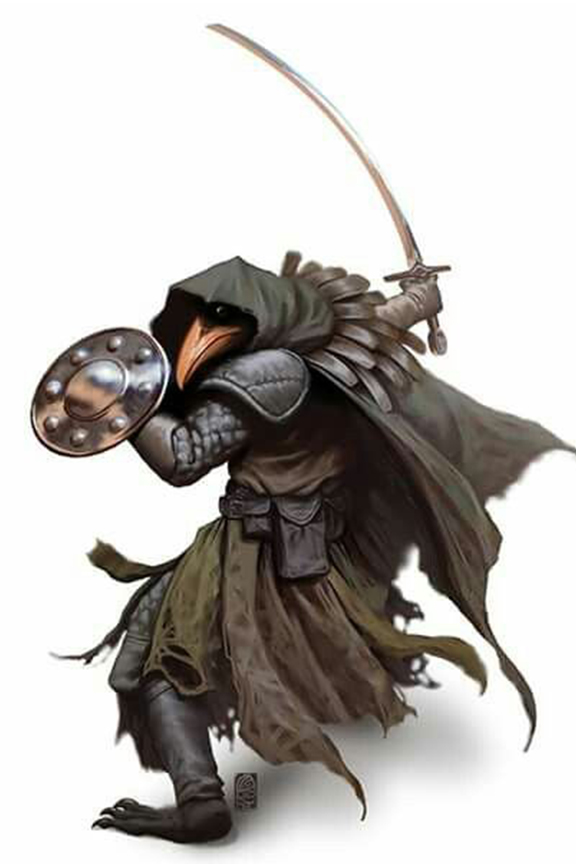 Leaving behind Enna at the entrance to the gatehouse as a rearguard of sorts while the rest of the party enters the ancient Dwarven city again in an attempt to rescue some of the captives they had previously observed pushing the gigantic cranking mechanism, the party sprinted through the killzone of the gatehouse under the assumption there would be Kenku archers waiting to attack intruders. Their assumptions proved correct and several of the party, most notably Biggle and Allegro, were struck by several shafts and seriously wounded by the time they made it safely to the other side. Unfortunately for the party, the denizens were on alert after the first intrusion and had additional Kenku guards led by one of the white feathered-robed magic users that the party had fought previously when they ambushed the patrol that had responded to Windharrow’s warning. With the enemy conjuring minor elementals of air to assist in the battle, and using decent tactics, the engagement proved quite challenging for the party, especially when the gatehouse Kenku arrived as reinforcements. Fortunately, Biggle and Severius had healing magic to spare and they were able to sustain the party members till they turned the tide of battle in their favor with Dovak slaying the last of the enemy, the magic user, with a flurry of slashes like he was hewing down a tree.

Deciding to expedite their mission to free the captives before reinforcements arrive, the party heads to the room where they saw the captives turning the giant cranks. Charging into the room and taking the occupants by surprise, Aszh tells one of the disheveled captives they are here to rescue them while the rest of the party takes up positions to cover their retreat. The surprise ends up being on the party when the overseers call the “captives” to action to attack the intruders to prove their loyalty. Aszh is struck by a club wielded by the same person he was just trying to rescue. Aszh sounds the retreat and the party avoids killing any of the previous-believed prisoners taking injury as they flee the room, Aszh barring the door once they make it out.

Somewhat confused since their initial mission was a failure the party decides to further explore the city. Upon a wide causeway set with towering obelisks, the party are surprised to find an emaciated human woman bound by rope to one of the obelisks. Severius determines that the woman is suffering from weeks of starvation and upon questioning the party learns that the woman voluntarily subjected herself to this state to prove her loyalty to Yan-C-Bin and become an initiate among the worshippers.

Deciding it would be wrong to leave the woman here, despite her protests to stay, the party frees her and using magical blessings of Gorm, Severius keeps her from dying as they carry her back to the Halfling farmstead where they plan to meet Lord Daylon. Hopefully, with some care and compassion, they will be able to nurse her back to health and gain helpful information.