I am pleased to report success! My companions and I were able to sway the remaining leadership of the Knights of Samular to allow Samular Caradoon’s entombment in the area that the lich Renwick had prepared. There was definitely difficulty in convincing some of the Knights that Renwick’s intentions were honorable, apparently they have known of the lich and his heritage for some time but, like me, did not trust him because of the undead abomination he had become. I am surprised at my acceptance of this matter. In the years previously I would not have entertained consorting with the undead, but my recent experiences with Lady Nightshade and Renwick have challenged my perspective. While I am wary of this “change,” I can only assume that because it was Gorm’s will it must be acceptable- the Knights of Samular’s agreement with the proposition and their pledge of service to become holy servants of Gorm is proof of that. I look forward to teaching this group of new converts on the ways of Gorm and I see opportunity in the future of Summit Hall becoming a bastion of Gorm, though the fortress is in dire need of repairs.

After our successful negotiations, Tobias expressed some dissatisfaction with our group’s battle tactics. He appeared to be somewhat of an expert in these matters and had many suggestions about battle formations, battle roles and contingency plans. There was some disagreement and some offense was taken, I was one of the offended parties I will admit, but in the end, there was a level of acceptance to what Tobias was saying and an agreement was made to try some of his suggestions. Having a bit of a break to wait for the Knights to prepare and transport Samular’s remains to the Sacred Stone Monastery, it was decided that we would head north to Beliard to look into these rumors of giants pillaging the countryside and perhaps allow us an opportunity to test some of our new tactics.

Accompanied by Lady Allison, one of the Feathergale Society members, we utilized their hippogriffs to make the long trip to Beliard short by flying overland. We had about four days before we were due back at the Sacred Stone Monastery for Samular’s entombment ceremony so we made haste in gathering information about the giant problem. The giants were indeed ravaging the countryside, mainly interested in taking cattle and food stocks. The raids had caused such a shortage that the cattle ranchers had put up a reward for the location of the giants’ camp so that an organized effort could be made to deal with it. One of the ranchers we spoke to told us about a recent giant sighting near an old watch tower out in the countryside past the ranchers’ land holdings and we decided to investigate. 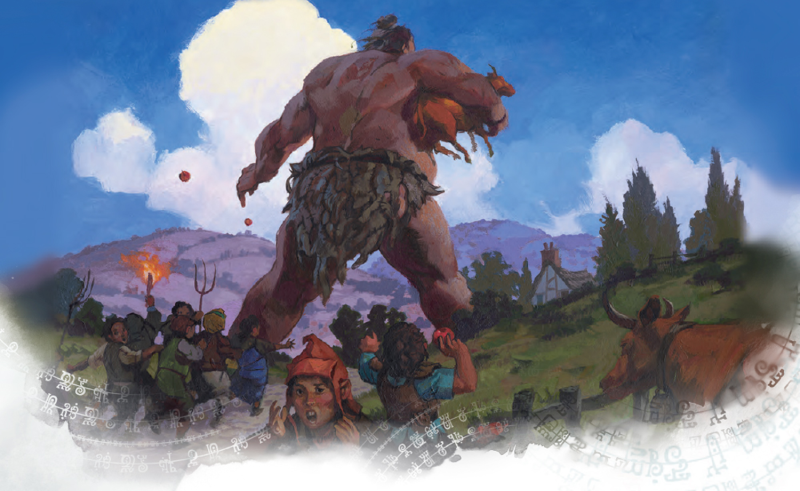