The bellowing roar of the Minotaurs echoed throughout the tunnels as Dovak and Tobias charged forward into the room trying to prevent the bottleneck that we had in the tunnels. I held back in the rear, as my companions engaged the enemy, asking Gorm to grant his blessing upon my friends to guide their attacks and defenses. The minotaurs were powerful, but they were reckless. They had no fear of the danger they placed themselves in to obtain a strike. While they hit hard, it was easy to bypass their defenses and inflict injuries. This lead me to initially believe this was only a momentary delay in our quest to find the blacksmith, but I soon found this was premature.

More Minotaurs converged on the site of the battle and all of us were surprised when we found these Minotaurs capable of breathing fire! Flames engulfed several of my friends, some even collapsed to the ground dying of their wounds. The tide of battle was quickly turning against us. This also signaled the arrival of the largest Minotaur I had ever seen. A massive brute of muscle wielding an battle axe. It was at this time that Tobias sounded a retreat. Priority change to recovering our fallen comrades and fighting a rearguard action to escape. 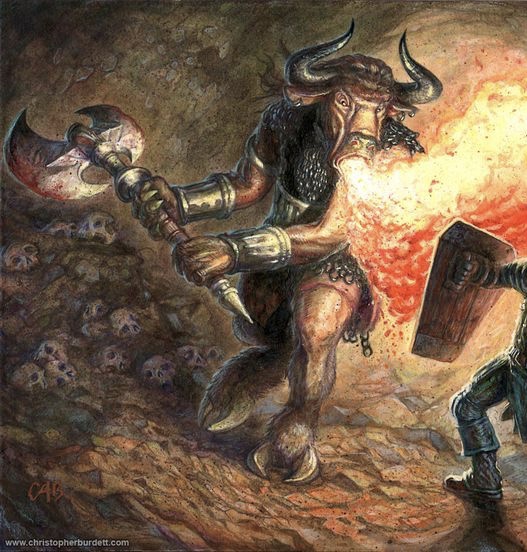 Aszh conjured a magical column of moonlight to block the Minotaurs’ pursuit while Tobias barred their passage so the rest of us could escape. Several of the Minotaurs ran to side corridors and it was soon apparent they intended to cut off our escape. Tobias taunted the Minotaur leader from the other side of the moonbeam but quickly regretted his decision when the enraged Minotaur barreled through the moonlight ignoring the pain it caused and savagely gored him. Bloodied and battered Tobias lay motionless on the ground. Ahead of our line of retreat I heard the sounds of combat as the Minotaurs intercepted our escape.

Times were desperate and I knew that we would all be dead. We needed a miracle and I knew I could call on Gorm for his divine assistance, as I had when we fought the giants, but I had begged Gorm for assistance less than a ten-day ago, and I knew I was tempting Gorm’s ire by calling on him for direct help again so soon after having done so. The screams of my friends being near death convinced me to take the chance, I had been Gorm’s faithful servant my whole life, surely Gorm would take that into account.

I went to my knees and said the prayers. I asked for Gorm’s holy vengeance and protection to be made manifest. I beg for his intervention in a dire situation. I asked him to have pity on his most loyal servant that I was too weak to do his work using the generous gifts he had already given me.

There was an explosion of divine radiant light and I watched in awe as my prayers were answered again by a Serph- Gorm’s most holy of servitors. To be blessed twice in such a short amount of time with the appearance of such a being, I had never heard of such an occurrence happening. Tears flowed down my cheeks and all was good.

The Feathergale Knights on Crusade