Our return to Red Larch was not as I expected. The quaint little town of friendly people with simple concerns of living had become a haven of despair where there was a very real fear of darkness. My party experienced this first-hand upon arrival when we witnessed several vile undead creatures, known as Shadows, chase down and take the life of one of the townspeople. With the holy power of Gorm and Titania on our side, we made short work of the foul abominations.

In the aftermath of the battle, we met the sheriff of Red Larch, Harburk, who was accompanied by Eardon (a cleric of Lathandar) and several armed men. Harburk remembered Allergo, Dovak and myself from our earlier work slaying the necromancer of Lance Rock and asked for our assistance. Apparently a wizard from the northern city of Sircurem came to Red Larch to experiment with an ancient travel stone of unknown origin that sits just outside the town alongside the Long Road. The stone pre-dates the founding of Red Larch and is covered in a language that no one understands. The wizard, a man named Lenchros, has studied similar travel stones throughout Elrond and has managed to decipher the ancient language. Using what he had learned, he was able to use the stone to open a gateway, which he walked through and has not been heard from since.

The problem is that the gateway is still open and from it sporadic waves of Shadows have been descending on Red Larch and the surrounding countryside. No one knows how to close the gate, and the best that the residents of Red Larch can do is enact a curfew, patrol the area and have a standing guard at the gate. That was two nights ago and the results thus far have been a slow attrition of death for the townspeople as some Shadows are able to evade or overwhelm the sentries at the gate and make their way into the town or beyond. Understanding the danger of an unchecked portal that periodically spews out undead, my group immediately agreed to deal with this threat, leaving Lord Daylon, Selina and Brundalthar to find shelter and care take Lady Savra’s remains. 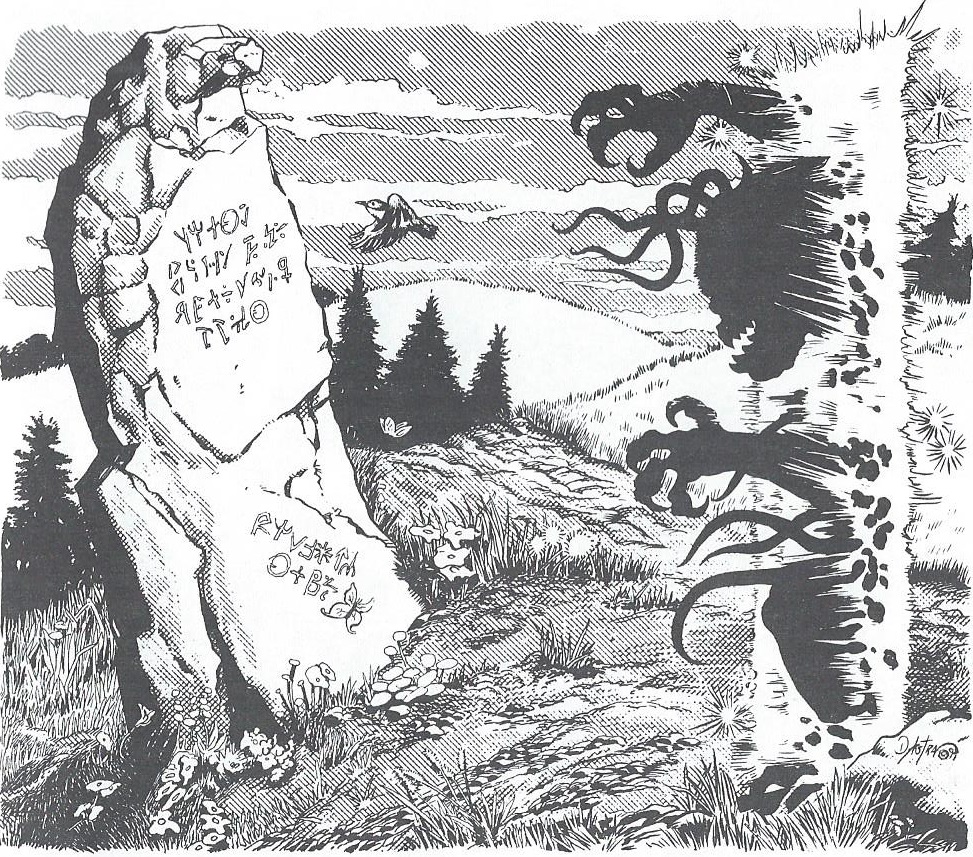 Allergo was the first to enter the gate (despite his displays of what could be considered cowardice or self-preservation above all others, he occasionally demonstrates that he is not afraid to step up to a challenge of the unknown) and returned to report that the gate lead to another place, a dark place with multiple moons in the sky. Bolstered by Allegro’s return, we all stepped into the portal…

There was a strange sensation, like traveling a million miles in seconds with an absence of sound. There was nothing but the feeling of extreme cold and a dark tunnel with a pinpoint of light that grew even closer. Going through the light, we emerged from a gate, similar to the one near Red Larch, with its own travel stone that stood on a hilltop overlooking a vast glass-enclosed octagonal city surrounded by a desolate wasteland. Three moons, in different states of waxing and waning, hovered in the night sky. After conferring with Enna, we believed that we had traveled through the Negative Plane of Energy (where the undead get their power) to reach this…place.

With the strange city below seeming to be the obvious place to start our investigation, we started down an established path. I am thankful that unlike my surface kin, I am blessed with darkvision, it has been beneficial numerous times since my time of the surface. Unfortunately, even with it, I was unable to detect the strange ooze-like creature that leaped from an overhanging cliff and tried to engulf me with its bulk. It was only by the blessing of Gorm that the creature just managed to miss, plopping down right next to me. My companions wasted no time coming to my aid, Aszh calling down a column of radiant moonlight to scorch the creature. The battle took on a brief moment of concern when Aszh slashed at the creature with his sword causing it to split into two separate entities. We also discovered that the creature had an acidic component to its composition and weapons that struck it became corroded and pitted. Fortunately, the combined might of the party was able to quickly dispatch the creatures and I was able to restore the damaged weapons with my Mending spell.

We continued down the path where it ended at a large chasm, a fortified gatehouse with a raised drawbridge on the other side leading into the city. Curiously, a large banner written in an archaic version of my language (which is an archaic version of the Common tongue that my companions speak) bid us “Welcome to Topaline” and asked for a toll of ten gold coin each to be tossed into the chasm. All of us had no issue with paying the toll, with the exception of Allegro, who pouted and refused to move until one of us paid his way. Most of the party was fine with leaving him behind, but I had some reservations about leaving my friend by himself in such a strange place, even though I knew that he probably possessed more gold than most of the party members. Some called me weak. Some called Allegro manipulative. I would venture both statements to be true, but I do not consider it weakness to care about the welfare of my friends, friends who have proven their worth during trying times, even if they were taking advantage of me. I know that Gorm has placed Allegro to share my path for a reason and I intend to see what that reason is, for better or for worse. Though I surely hope it is for the better.

With the toll paid, a strange humanoid creature that none of us had ever seen before, lowered the drawbridge and without a word, disappeared back into the gatehouse. We proceeded in silence, alert for danger, but were greeted by nothing of note. The city laid out before us in darkness with no moonlight piercing the glass enclosure. The city appeared to be…dead. There was no signs of life. No lights on in the city, just wide avenues surrounded by darkened deserted buildings of strange architecture. Allegro’s Drift Globe was the only light visible and the rest of us relied on our darkvision to navigate. This strange city had the atmosphere of a mausoleum and it was not long before its masses of undead inhabitants converged on our position. 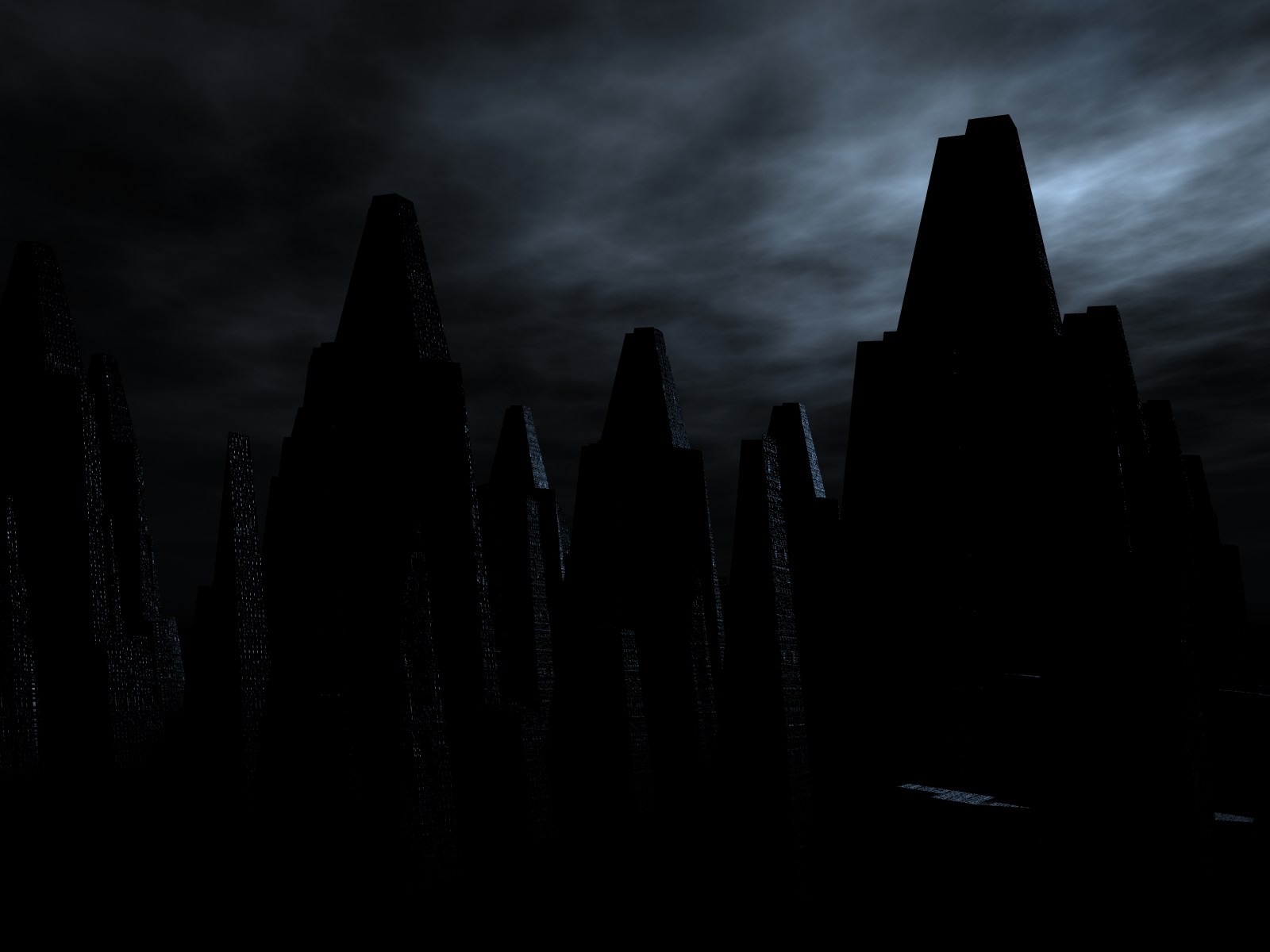