Dovak tells us that the ancient stonework of these caverns below the Sacred Stone Monastery are Dwarven in origin and that has lead to some speculation considering the presence of Duergar fighting alongside the Monks during our battle at the Monastery’s entrance. In our wandering of the sub-level below the Monastery, we came across a locked gate barring an ancient staircase leading further down. This gate was unlocked using a key that was found on the vanquished orog leader and after a long descent, we have arrived at a grand chasm spanned by a stone bridge. Aszh and I have discussed our observations and considered that perhaps Duergar reside in the subterranean realm below the Monastery and are in an alliance with the monks above.

Our foray into the Monastery has been a challenge certainly, and laying here in prayer to Gorm in the darkness of an ancient Dwarven hallway still surrounded by enemies my comrades and I are uncertain of our next action. Allegro has become separated from the group. His attempt to lead away our pursuers was not successful and his fate remains unknown. I am asking Gorm to bless me with a Sending spell so I might commune with my friend and ascertain his status. Above us, in the subterranean level directly below that Monastery a deadly Umber Hulk stalks the passageways. Aszh and I were nearly killed by the creature as we attempted to hold it off while the others retreated. The creature left us unconscious while it pursued the others. Fortunately Gorm was with us and he ensured the beast was lead astray while our companions returned and dragged us to safety. 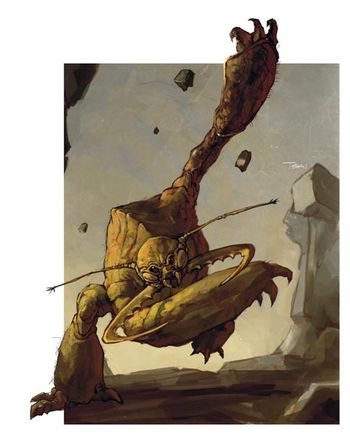 The ancient stair and the area it lead to appears to be of questionable safety. Immediately upon attempting to cross the stone bridge across the chasm we were attacked by gargoyles which were concealed amongst the stone surroundings. The creatures were difficult to slay, our weapons seemingly not as effective as they should have been, even Dovak’s normally devastatingly powerful axe blows were significantly reduced in effectiveness. After killing two of the creatures, the third flew off into the darkness. We decided to not proceed forward. We are too weak to continue further without rest and recuperation and most of us feel a need to reunite with Allegro before proceeding further. I do not know if I have been in worse circumstances than I currently find myself in but I have faith in Gorm’s ability to provide and protect.