By Ulaa’s hammer the sand storm was massive. Never had I seen such a tempest of power, and I hope to never see one again. The blinding wind and sand with the confounded howling wind was enough to separate us from the caravan and when it finally let up we were utterly lost with no idea where the caravan had gone or where we needed to go to find it or civilization.

We tried our best to navigate the ever shifting dunes and days later our mounts died, our food ran out and frustration set in. Thank Ulaa for blessing me with the ability to create water from the drops of what we had left or dehydration would have claimed us surely. Us meaning the five of us. My friend, the mountain ranger Takashi, a fellow dwarf from Thunderdelve Mountain named Dovak, who I do not know much about other than he was cast out of the dwarven army in disgrace, though he appears to be quite a capable fighter, and two half-elves that share an interest in alchemy, though one appears to be a mage of some sort and the other displays the talents of a rogue. Bonded by survival, we have walked and walked miles of desert looking for something to save us from our plight.

Finally my prayers were answered, at least I hope so. The winds had uncovered the topmost ruins of an ancient sand-covered city, and near the top of a massive pyramid adorned by three statues of long-forgotten gods we found a passageway inside. With nothing but death waiting for us if we continued our wanderings in the desert, this passage enticed us to explore in the hopes of changing our predicament. 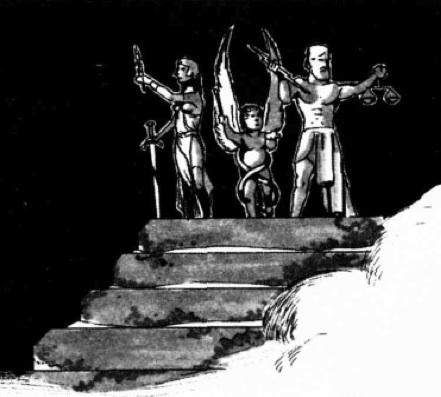 The stonework was ancient but spoke of human design. A stone mason by trade, I could tell that this was expert craftsmanship, as much as could be expected of a human. Luckily all of our party, but Takashi was blessed with dark vision and we were able to navigate the pitch black passages deeper into the pyramid, which was descending downward. There were few signs of recent passage and no immediate signs of intelligent occupation. We ran into some vermin, fire beetles, stirges, and a giant lizard, and despite some disappointment in Jorael’s roguish abilities, the party as a whole worked well together in dispatching these creatures.

Finally we arrived in a section that appeared to be a barracks of sort and were happy to find it occupied by strange pale-skinned humans that pledged allegiance to an ancient almost forgotten deity called Gorm- a just god of battle and storms. They explained that the Brotherhood of Gorm was but one of four factions that strived to lead the populace of this lost city- the great ancient city of Cynidicea. Once wealthy and powerful, the city fell after its population turned to decadence following the rise of the Cult of Zargon- one of the city’s four factions, they worship Zargon- an ancient and powerful god rumored to reside in the lowest levels of the pyramid. It is said that Zargon cannot be destroyed, though many have attempted to do so in the past and after the few that claimed success, Zargon and his cult would return to bring the city back into turmoil. None of the cults get along and each believes that they have the answer to returning Cynidicea back to glory.

Something in the message of Grandmaster Kanaduis, the leader of this small band of Gorm followers, stirred the emotions of my friend, Takashi and he pledged to join the Brotherhood as a lesser member to spread the word of Gorm to the people on the outside when we hopefully leave Cynidicea. While Gorm’s influence sounds like something I would approve of, my heart and soul belong to Ulaa and I would not turn from her service, but I respect the followers of Gorm and the ideals they stand for.

With Takashi’s acceptance as a lesser member, the Brotherhood has offered us food and shelter for the night. They have told us that there are sometimes outsiders that come to the city below to trade with the Cynidiceans and that these individuals may be able to help us get back to our civilization…

Life and Death in the Burial Tombs of Cynidicea